I Wanted It Really Really Bad!!!

Have you ever bid on something at auction......bid.....and bid.....and bid.....and were up against someone that seemed to have no limit?   I have. When the auction was over and you were on the way home, alone in your car, did you cry?  I did. I was bidding on an antique Tibetan childs (toddler) tunic type top. Probably meant for special occasion or ceremonial use based on the fact that it had quite a lot of Tibetan silver beads hanging on the front of it. It was quilted and the outer layer was woven and the inside layer was a faded rose floral cotton print. It was an unusual combination. (at first glance I thought it was Native American)
I took one look at it and knew that it could be the inspiration for the new direction I wanted to go in  my jewelry making. A bit tribal, Asian, primitive, mixed with a bit " western cowgirl".  (hey...stop laughing, it could happen!)
Eventually, ( lots of weird...I don't quite know why I am crying... tears later ) I realized I could be inspired  by the tunic, even tho I didn't own it. However, next time I see the winning bidder I am going to ask her if she would consider letting me take some photos of it to put on my inspiration board. 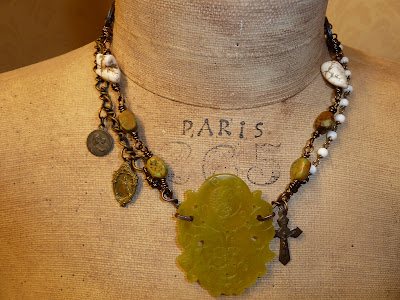 In the meantime.....I found this piece of undyed jade..a bit of an odd color actually, and used it with some greenish and brown torquoise. Stones I would usually think of using in a more western type piece of  jewelry. The white stones are howlite, there is some white rosary beads, and a couple of religious medals. I am not there yet, and these aren't the colors I am yearning for, but it is the direction I am heading. 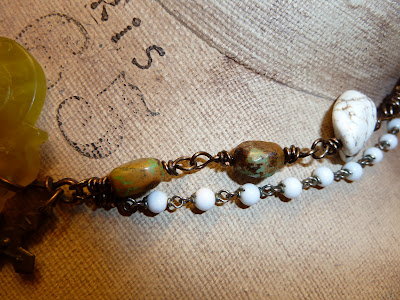 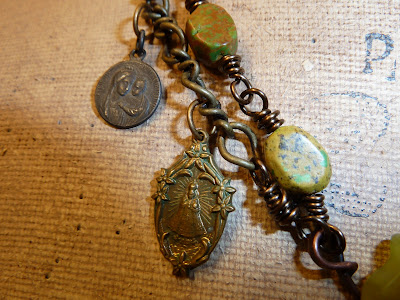 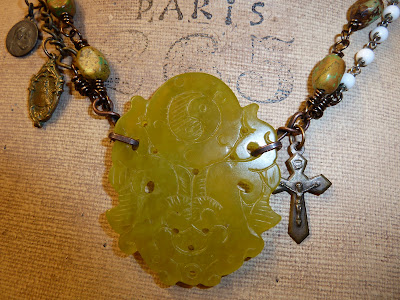 (If you just happen to have a darling  antique Tibetan childs tunic  hanging around........call me!!!)

On a more serious note,  while searching the internet for traditional Tibetan clothing I came across a lot of sites with information for FREE TIBET. I had no idea that The Tibetan people had been  basically "without a country" for my whole lifetime.  If it is something you would like to know more about  you can go to :

Baby It's Cold Outside!! 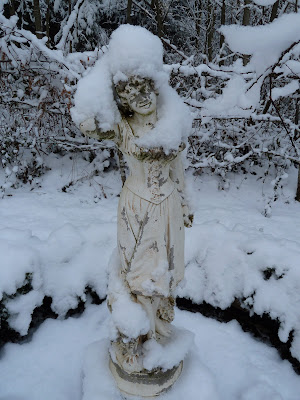 I am not a fan of snow but when I  went out this morning to brush the snow off some bushes,  I thought this statue looked beautiful. 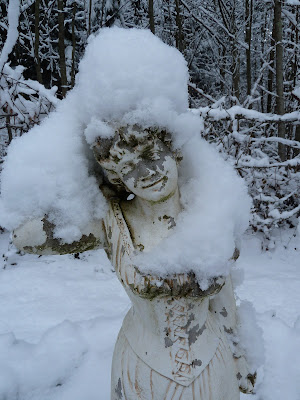 
I thought I'd be planting bulbs today but due to snow I was instead inside once again, working on finishing up past projects. I have been inspired by all the banners I see on different blogs and at vintage show/sales but none of them were "quite me". Then this winter when I painted our bedroom I decided to make a banner with a western touch. I had it basically done, I just needed to sew some buttons on here and there, and I added a couple of religious medals and other misc. I really like how it turned out. I found most of the toy holsters on Ebay. I bought them not really knowing what I was going to do with them....but they were so stinking cute! Anyway, I think they were perfect for this project.  Funny how "junk" always finds a home. (around here anyway)
﻿﻿﻿﻿ ﻿﻿﻿﻿﻿ ﻿
(sorry about the photos.....dark snowy day here)
The other gals on the banner are Lillian F. Smith and Lulu Parr. All four of these ladies traveled at one time or another with Buffalo Bills Wild West Show. I suppose Annie Oakley is the most well known. This past summer while in Montana we went to The Buffalo Bill Museum in Cody . I was in Heaven! Out of all the amazing antiques and other things there, the one thing I remember the most was one of Annies costumes. It was incredibly detailed and I couldn't believe how small it was.
Ok, one more thing off my "finish it'' list. If Spring continues to take it's sweet time getting here, I might actually get caught up!!
Posted by Gayle at 7:54 PM 1 comment:

Back Where I Started??

The whole issue of genetically modified food has me creeped out. I don't know as much about it as I should but the time to learn is now before it's too late. I am worried that at some point GM food will be the only thing available to us in the grocery stores. So shopping at and supporting your local Farmers Markets is important. Or even better, growing as much of our own food as we can.  I used to do that back in "the day" but somehow thru moves and life changes fell away from it except in very small amounts. Oh yes, that was me, canning, milking goats, spinning, making soap, etc. With one big difference.....I was a lot younger!!!

Here is a list of seed companies that offer free catalogs of organic seed. I can't speak for all of these companies some of them are new to me. But even just reading thru their websites you can get a feel for what is going on in the seed  industry today. I am certainly no expert but I am trying to educate myself on this issue. I hope you will as well. If you know of any other organic seed companies that you would like to share please feel free to list them in the comment section.

What are you planting in your garden this year?

EDITED on February 22 to add.......When I was in Fred Meyers yesterday  I noticed that over the Ed Hume seeds there was a sign stating  "no GMO " . So for those that only want a pack of seeds here and there without ordering from catalogs that might be an alternative with the added benefit that they are a local company.
Posted by Gayle at 8:01 AM 4 comments:

Last night on Antiques Roadshow a guy brought in a huge piece of memory ware to be appraised. It was circa 1900, very cool, and even had some teeth of the human variety on it. Needless to say my phone started ringing.."quick! turn on Antiques Roadshow...there's one of those weird junkity jug things that you like on". I was already watching the show so I got off the phone as fast as I could just in time to hear the appraisal. Now granted it was an old piece and quite large, (a plant stand /tower or something?) but...........the appraisal was $4,000-$6,000. Yep! Vindicated!! I'm just saying.........


This memory jug coming to Antiques Roadshow sometime in the 20's.........3020 that is! If you want to see more memory jugs you can go to Laurie Zuckerman's blog She sells a CD that tells how to make memory jugs and also has many photos of these fascinating pieces of folk art. It's a great CD, well worth the asking price and Laurie is an amazing artist as well.

If you missed Antiques Roadshow and would like to see the appraisal of the memory ware, here is the link.
Posted by Gayle at 4:40 PM 1 comment:


I found these old bottles yesterday at a local thrift store for next to nothing. I  am always drawn to old stoneware bottles, jars, jugs, actually most all old heavy stoneware and crockery, These have a few little chips and and dings but I like that about them!  Some of these may end up as memoryware or on one of my bottle trees. But for now I like them right here.....on top of the kitchen queen. 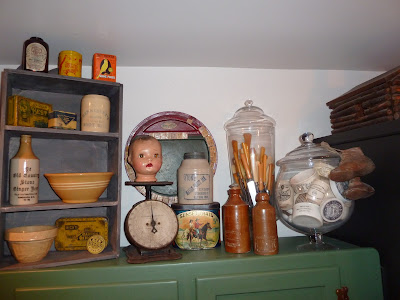 Happy Valentine's Day!
Posted by Gayle at 9:38 PM No comments:

Kneedeep In Half Done

One of my New Years resolutions was to dig out all unfinished projects and "get er done!"
The silver bezel on this necklace was a class project from a silver smith class I took. (don't ask when)
This has been sitting on my workbench waiting for inspiration.  THEN in my stocking last Christmas
I found this amber colored antique bead and it all started coming together. I finally finished it last week.
I have been toying with the idea of pouring ICE RESIN over the top of the tintype to protect it. My concern is that it would give a glossy look to the tintype.  Have you ever used ICE RESIN? Any advice?

I am hoping you will check in with me occassionally to see what I have been up to in my studio, growing in my garden, or what rusty crusty treasures I have drug home. 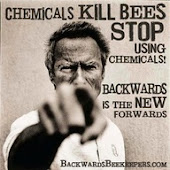